Marvel Legends Zombie Captain America was a 2021 figure that was one of my surprise favorite Hasbro releases of that year. The level of uncharacteristic goriness in a Marvel Legends 6” toy felt fresh and new, and immediately left me wanting more Marvel Zombies figures. It took a bit over a year, but Cap finally has reanimated reinforcements to munch on brains with: is the recently-released Marvel Legends Zombie Scarlet Witch a worthy undead addition to your collection? 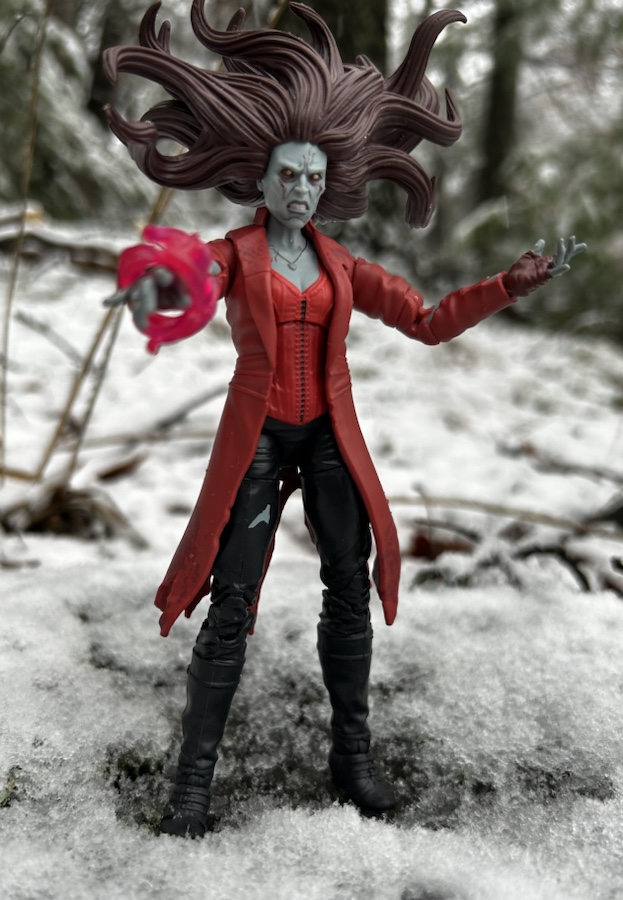 I am by no definition a “zombie fan”. I’ve never watched an episode of Walking Dead, seen a genuine zombie horror movie or played any zombie video game. I perused a few issues of the Marvel Zombies comics to see what the hype was about, but those also were not for me.

So when it was revealed there would be a Marvel Zombies-centric episode of What If?, I raised an eyebrow and prepared to hate it. And as I anticipated, it did turn out to be amongst the weaker episodes of the animated series. But what I didn’t expect was to be enthralled by the power of an undead, unhinged Zombie Scarlet Witch. I knew I wanted a toy of her right away, and over a year later, heeeeeeere’s Zombie Wanda. How’d she turn out? 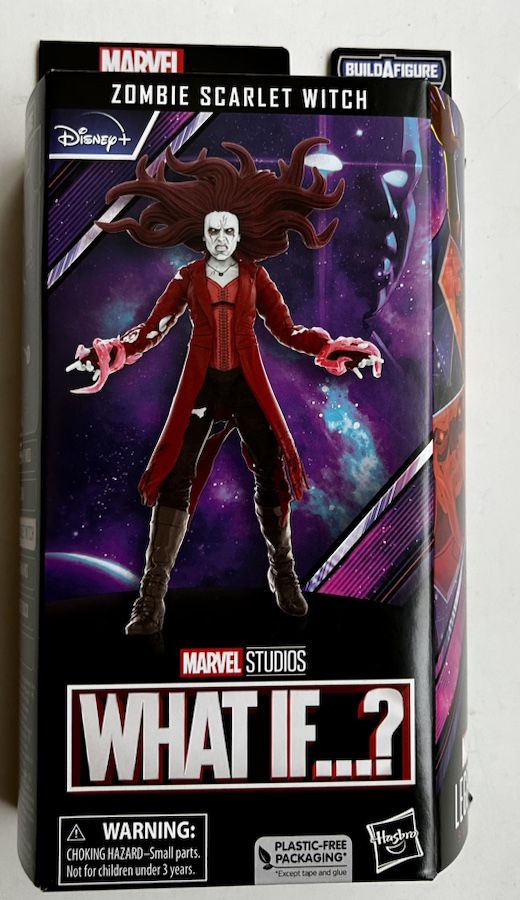 As part of the inaugural plastic-free packaged Marvel Legends Build-A-Figure series (featuring the Khonshu BAF), Zombie Scarlet Witch comes in a flimsy-feeling cardboard box. I think Hasbro is quickly going to see a sales catastrophe with this style of packaging, but that’s neither here nor there. 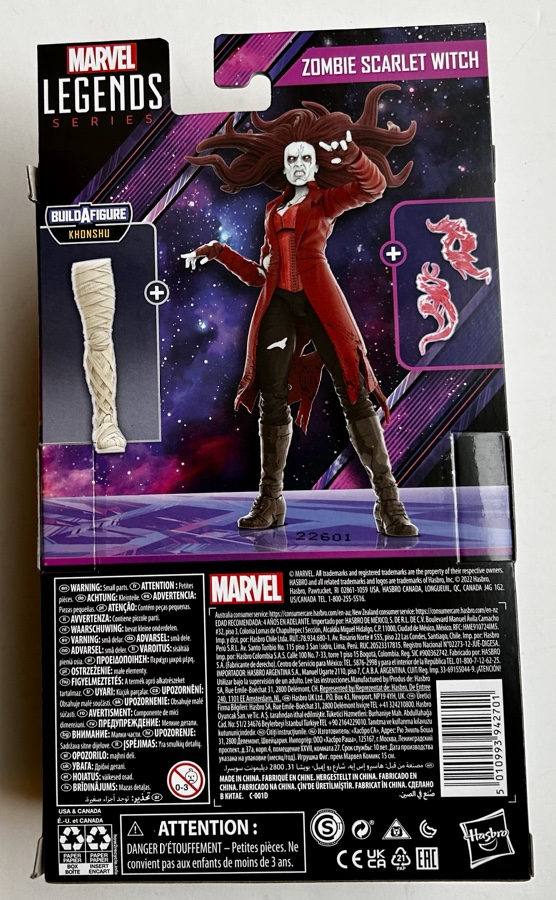 Bios are gone on these boxes, but the back does clearly Spotlight both the action figure inside and all of the included accessories (including a Khonshu Build-A-Figure leg). The other figures in the wave are not shown on the new box backs, unfortunately. 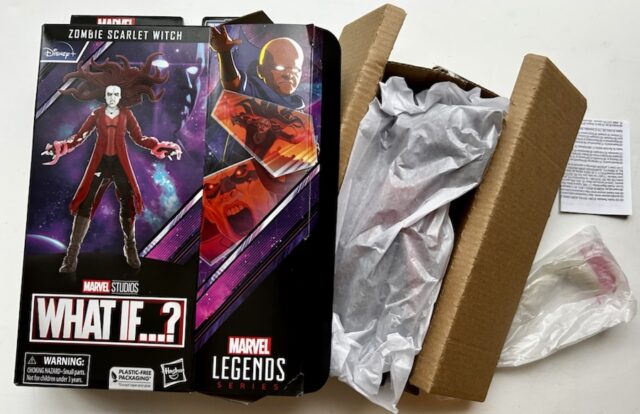 Inside, we find a cardboard insert along with two tissue-wrapped inserts: one containing the 6” figure itself and the other all the accessories.

As soon as I unwrapped the figure, I was enthralled by the wild and crazy, grotesque Zombie Scarlet Witch head. The gritted teeth and yellow eyes perfectly complement the insane long hair that’s blowing chaotically. This is easily one of my favorite portraits in Marvel Legends in quite some time. 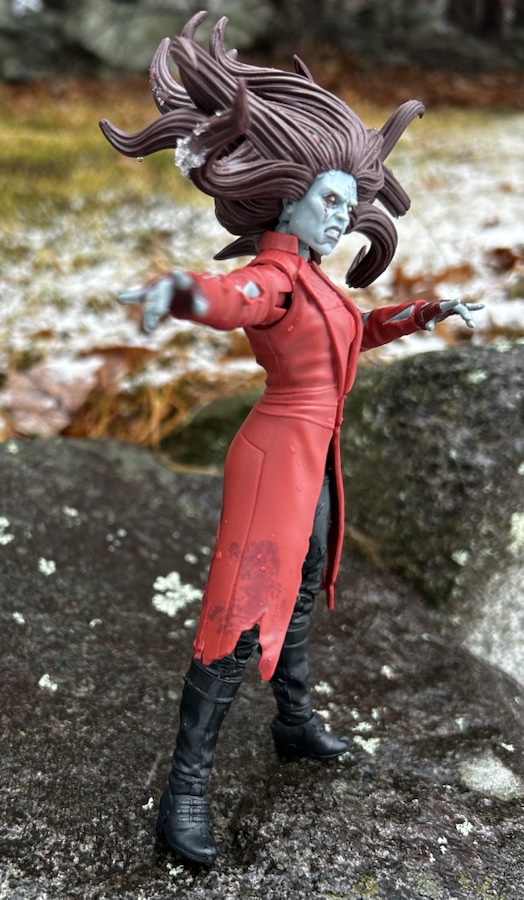 The rest of the figure has its highs and lows, though the head is the clear highlight for me. I was afraid the heeled boots and heavy head would make the toy hard to balance, but she stands stably with little effort. I am concerned about the weight of the head loosening the neck joint long-term, though. 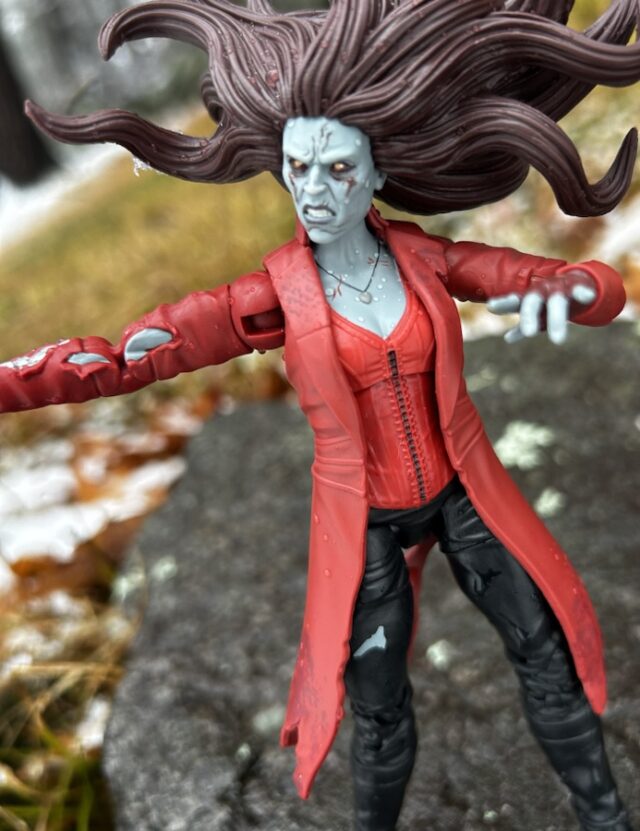 While we get modern pin-less arms on Zombie Wanda, the old-style legs aren’t as blessed. Even so, the pins aren’t too apparent since they’re black pins on a black leg, and the red jacket comes close to concealing them. New legs would be better, but I understand that might not have costed out budget-wise. 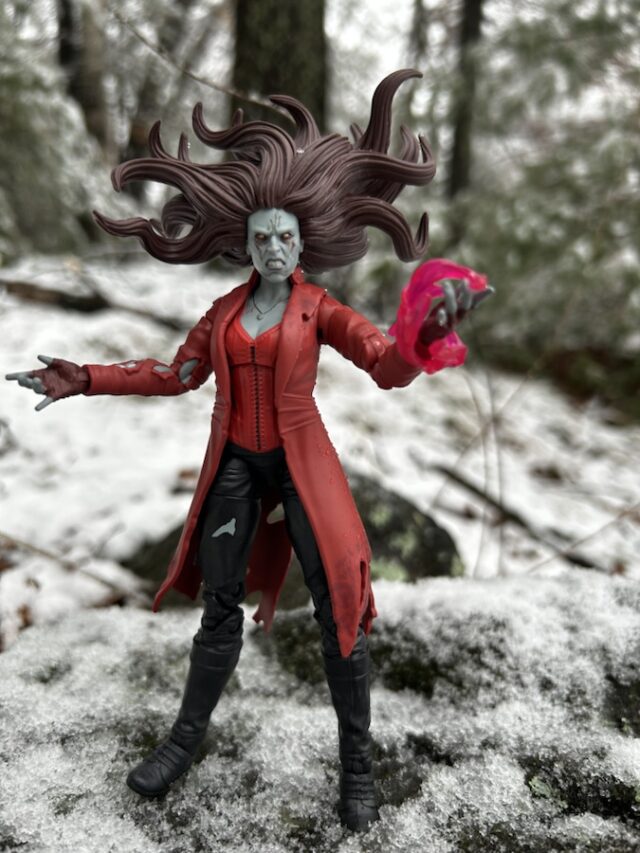 I’m less forgiving of what I consider the figure’s biggest misstep: a painted-on grey-green patch on Scarlet Witch’s right leg, signifying a tear in the pants and rotting flesh underneath. Having this detail be just a flop of paint on a fully-smooth leg looks utterly ridiculous, contrasting laughably with the actual sculpted “battle damage” parts. 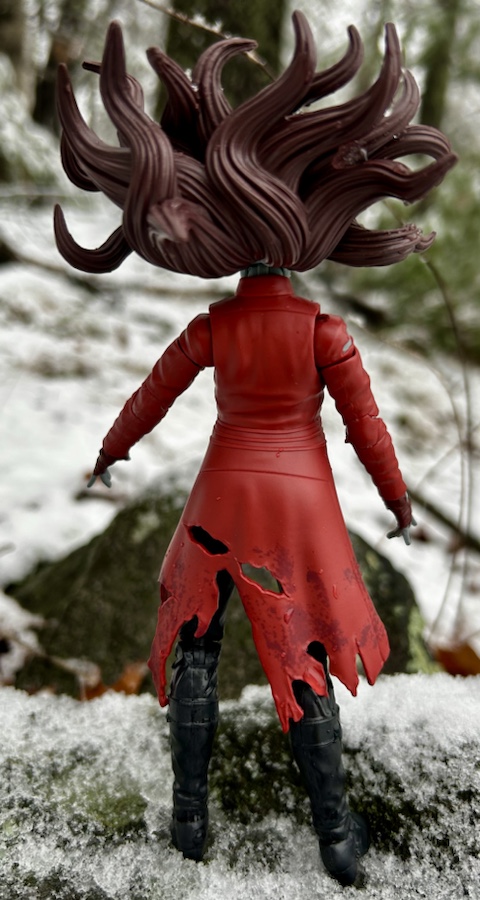 I’m going to have to place this action figure at an angle that obscures the “battle damage” or just place her far away from me, because this cheap cop-out detail is just too hard for me to get past. The properly executed, sculpted tears on her other leg and arm look awesome, at least.

The “dirt” on the lower, tattered portion of the back of Wanda’s jacket looks okay, though it’s not aesthetically perfect. 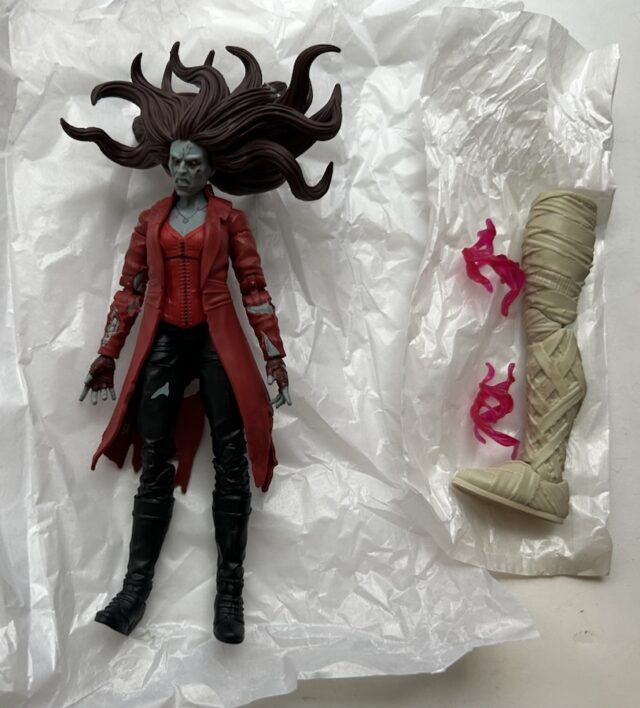 The accessories include some wrap-around effects we’ve seen before (which look and attach perfectly in magical bright pink), along with an aforementioned Khonshu BAF leg. Female figures often get the body chunk for a Build-A-Figure, but I think the Howard the Duck figure pack was the correct choice in this instance. It’s unusual to not get any alternate hands these days, but Scarlet Witch Zimbie doesn’t really need any. 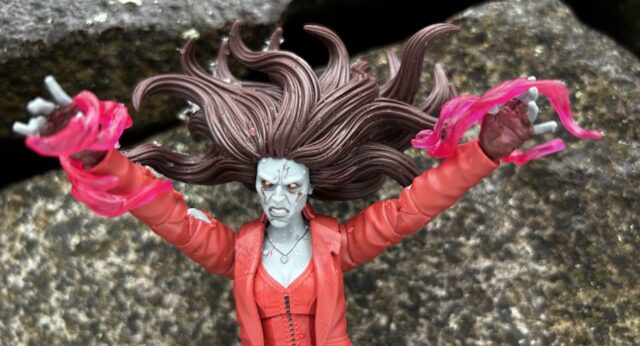 The articulation won’t be setting any world records or anything, but it all works alright and is fine for a non-martial artist like Wanda. I do worry about that head joint weakening, though. 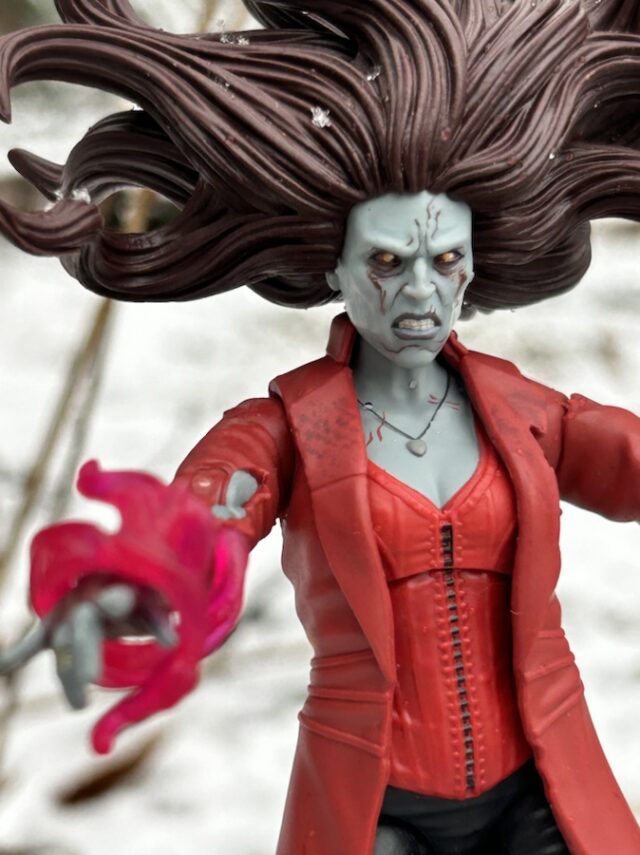 Overall: I was so disgruntled with the painted-on “exposed zombie flesh” on Wanda’s thigh that I almost knocked this down to a ‘C’, but there’s too much I like about this release for that step. The head sculpt on Marvel Legends Zombie Scarlet Witch is top-notch, the effects work perfectly and the colors look superb together. The faux-“ripped” right leg is an eyesore, and this action figure is overall lesser than ML Zombie Cap was, but it’s still a really fun release that may be my favorite non-BAF inclusion in this wave. 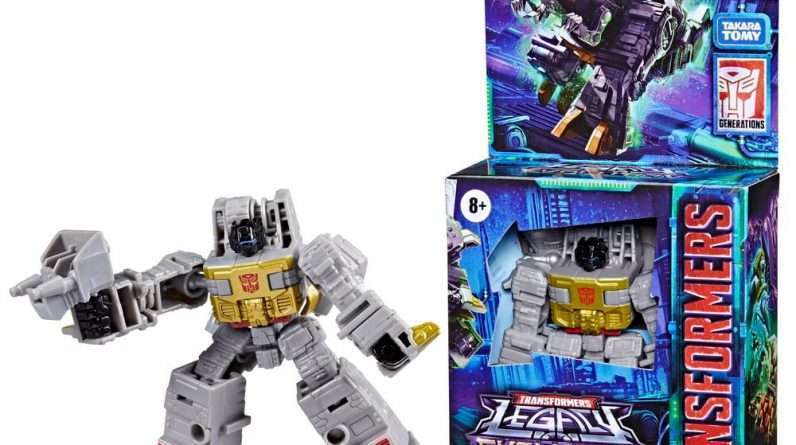 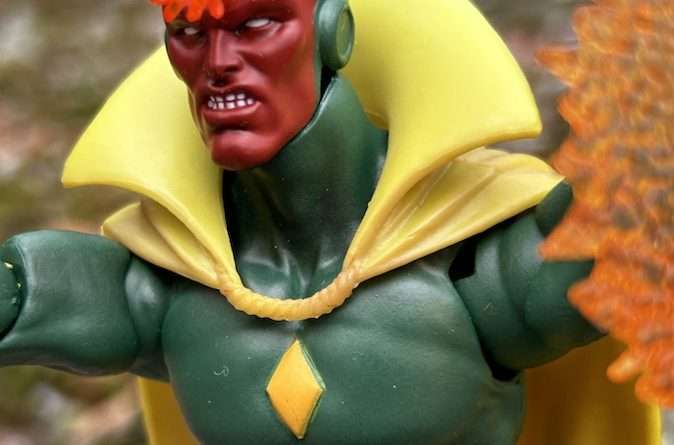 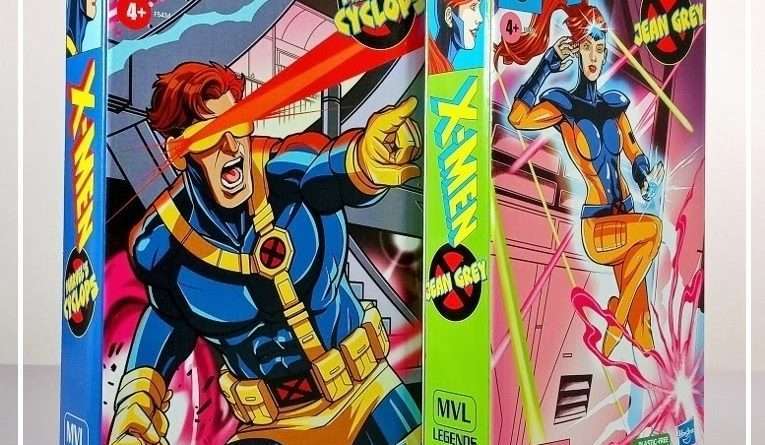 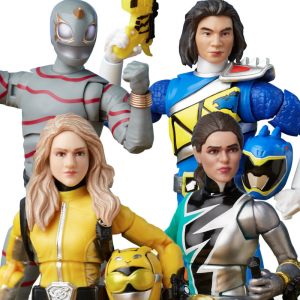 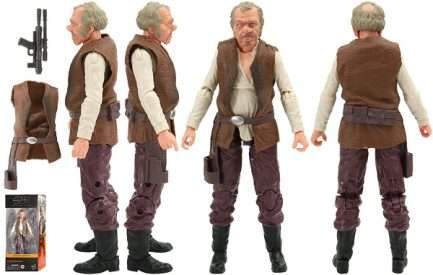